Welcome to another edition of Massachusetts Latino News +, a segment where we have conversations of most interest to the Hispanic-Latino community.

Our guest this week is a leader who has been nicknamed Chelsea’s “Superwoman.”

Gladys Vega is the Executive Director of La Colaborativa, an organization with a mission to “empower Latinx immigrants to enhance the social and economic health of the community and its people; and to hold institutional decision-makers accountable to the community.”

The organization’s six-month program focuses on survival, stability, and empowerment in working with individuals. The goal is then for the person to take those skills and reinvest them. “Once we help you…how do you give back to the community,’ said Vega in the interview. “Why don’t you get involved in community organizing?’ she asks participants. “So we can do social justice changes.”

A native of Puerto Rico, Vega moved to Massachusetts with her family at a young age. The experience of witnessing first-hand from her parents the challenges facing Hispanic-Latino residents in the United States inspired her to work with immigrant workers.

“Their rights are being violated,” said Vega about workers (many of them undocumented) who are getting paid below minimum wage and are exposed to dangerous working conditions. “In the United States, regardless of immigration status, you (employers) need to pay the state’s minimum wage.” Massachusetts has a $14.25/hour minimum wage.

In 2006, Vega became the organization’s executive director. She successfully urged the City Council to make Chelsea the third sanctuary city in Massachusetts in her tenure. In addition, she helped found Centro Latino, the only direct service for Hispanics-Latinos in Chelsea at the time. Vega gave her time to the Chelsea Board of Health and United Way Committee and served as a Democratic delegate for the National Convention in 2000.

“In addition to providing yuca, platanos, aguacate…we also use the food line (pantry) as a lifeline,” she said. “We used the food line to organize our community in terms of vaccinations.” La Colaborativa leads community-based COVID testing and vaccinations as Hispanics-Latinos continue to struggle with inequities in Massachusetts’ health care system.

In 2007 and 2008, she was named one of Massachusetts’s one hundred most influential leaders.

Last year, Vega was recognized by the Eastern Bank Foundation with the 2021 Social Justice Award. The award recognizes community leaders who have made an outstanding impact in addressing critical social justice issues.

Nancy Huntington Stager, President and CEO of the Eastern Bank Foundation. Said of you, “She is an extraordinary leader and community trailblazer who leads by example and continues to be a social justice champion. She empowers individuals to realize they can affect change and make the difference they seek….”

“We are especially honored to receive the 2021 Social Justice Award from the Eastern Bank Foundation because it understands all too well that relationships and trust in the community are always necessary to create justice, equality, and opportunity and especially during a pandemic,” said Vega in accepting the award.

For more information on La Colaborativa, click on this link: 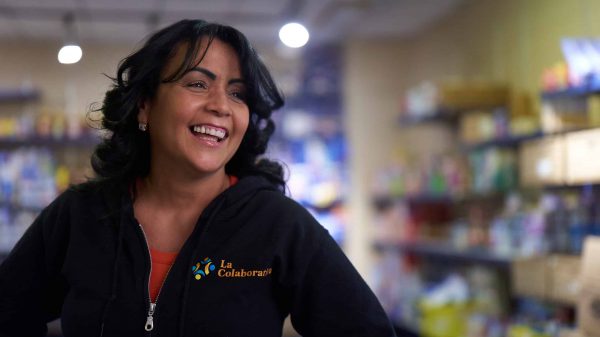